We use Retail Pro on mobile devices to ramp up more points of sale and get through lines faster.

Don't have time to read the full story? 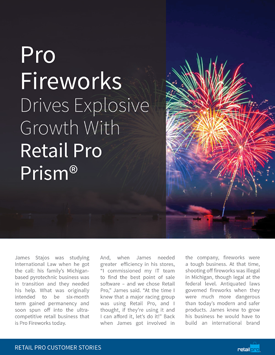 The Path to Retailing with Retail Pro

James Stajos was studying International Law when he got the call: his family's Michigan-based pyrotechnic business was in transition and they needed his help.

What was originally intended to be six-month term gained permanency and soon spun off into the ultra-competitive retail business that is Pro Fireworks today.

And, when James needed greater efficiency in his stores, "I commissioned my IT team to find the best point of sale software - and we chose Retail Pro," James said. "At the time I knew that a major racing group was using Retail Pro, and I thought, if they're using it and I can afford it, let's do it!"


Back when James got involved in the company, fireworks were a tough business.

At that time, shooting off fireworks was illegal in Michigan, though legal at the federal level. Antiquated laws governed fireworks when they were much more dangerous than today's modern and safer products.

James knew to grow his business he would have to build an international brand of fireworks. So he launched a line of fireworks using the best factories, chemicals, and packaging. He then added that line into the product lines sold in his booths and stores.

Soon after launching this first line of fireworks, James opened his first store in Indiana, not too far from the Michigan border, but kept up the drive to remove obstacles to building his business in his home state.

In 2011, James successfully lobbied lawmakers to change the outdated laws, and now, the company runs 13 Pro Fireworks stores in Michigan.

Year after year, James kept advancing his craft and his business. Pro Fireworks was the first US company to offer sky lanterns and has since donated them to organizations including Make-A-Wish, Susan G. Komen, and AIDS Foundation.

The company was also the first to use neon colors primarily in artillery shells and cakes, which are more expensive to make and therefore less common. Pro Fireworks' products are designed to be biodegradable and safe. James continues to advance into new markets with niche products such as noiseless, smokeless, and perchlorate free fireworks.

"When people come into our stores, their eyes light up because fireworks are something they want to buy," James said. "Roughly 30 percent of our customers are enthusiasts – they know exactly what they want and probably know more about the fireworks than I do! The remaining 70 percent want an experience -- and that's really where we can help the customer choose the best fireworks for the experience they want to see." 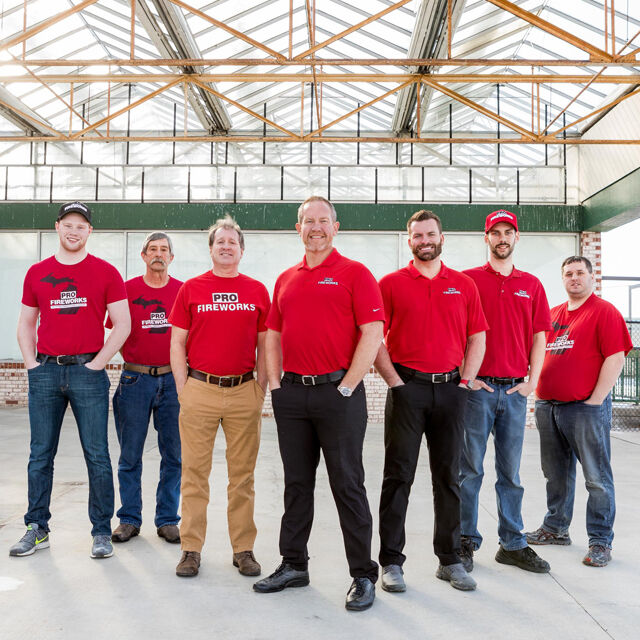 
James's conquer-all, innovative approach has had everything to do with Pro Fireworks' success - and Retail Pro provides the solid foundation he relies on most: efficient point of sale and retail management software.

"We typically have five stations with Retail Pro Prism at the stores, but for the Fourth of July, customer volume vastly increases. We need 40 of these stations for one day of the year with 60, 70, 80 items per transaction, while we need a fraction of that number during the rest of the year," James noted. "So, we also use Retail Pro on mobile devices to ramp up more points of sale and get through lines faster."

"Pro Fireworks represents everything that a modern specialty retailer should strive to be. They are inventive in their approach to a competitive market, and we enjoy providing expert support and integration services for the Pro Fireworks team," said Michael Armstrong, Director of Sales and Marketing for Complete Data Systems.

Having the full Retail Pro software on iPads has also empowered Pro Fireworks sales associates to invest more time with high-spending customers and offer a more engaging, personalized customer experience while they scan in their purchase.

To capitalize on the influx of customers without compromising an efficient experience, James's team integrated an ID scanning app with Retail Pro to help them quickly collect customer information without holding up the line.

"The more quickly I can get people checked out, the better the customer experience, and the more fireworks I can sell. Everybody benefits!" James said. 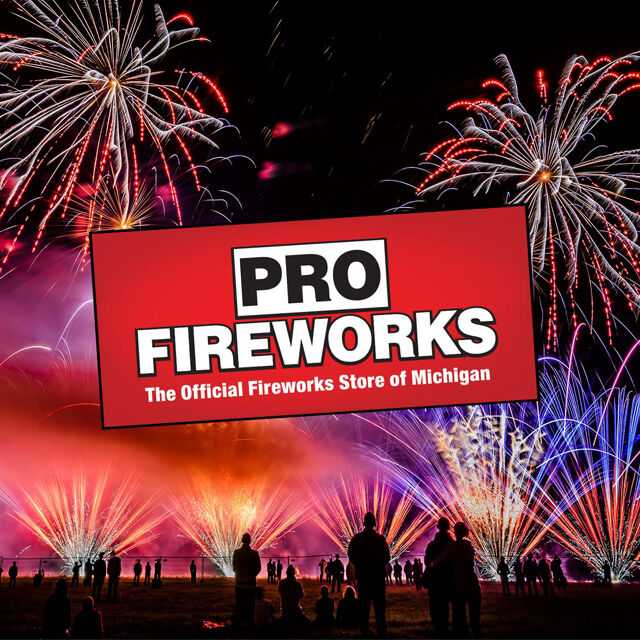 For example, after spending $1,000 at the store, a shopper earns VIP status for life, and is rewarded with 30 percent off every purchase. Retail Pro helps the company apply rules to those sales, so discounts aren't stacked and applied multiple times.

"I love that we can integrate software with Retail Pro so we can target customers with more personalized offers," said James. "We feed data captured in Retail Pro to Perk Panther for SMS marketing, and text a notification about one-day specials or flash sales to get them in the store."

Michael added, "Retail Pro tracks data every step of the way so that Pro Fireworks can make the best decisions for their business and build a fun environment that keeps their customers coming back."

The Pro Fireworks experience is one worth returning for. "Once you leave your email with us, we send you a Christmas card with an offer for a free 'cake.' Customers love that," James said. "Our promotions are based on what the customer really wants, and we make our specials so good that no one ever wants to opt out."

Today, Pro Fireworks credits Retail Pro with giving them the flexibility they need to drive sales and keep growing their business, efficiently. 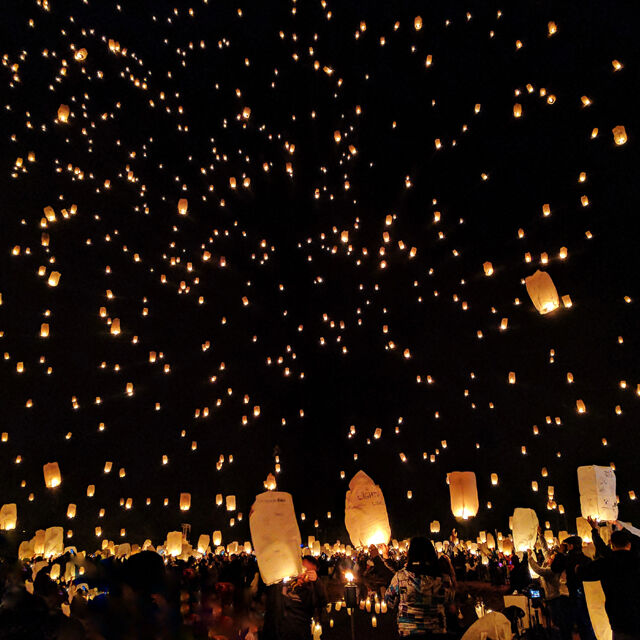 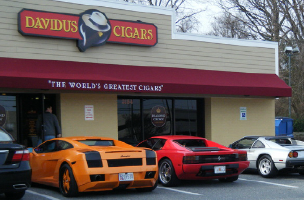 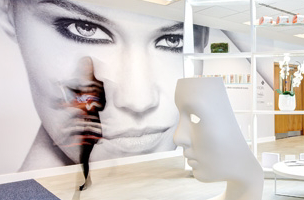 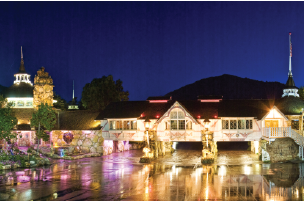 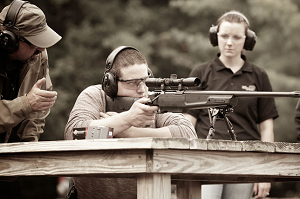 "At the time I knew that a major racing group was using Retail Pro, and I thought, if they’re using it and I can afford it, let's do it!" 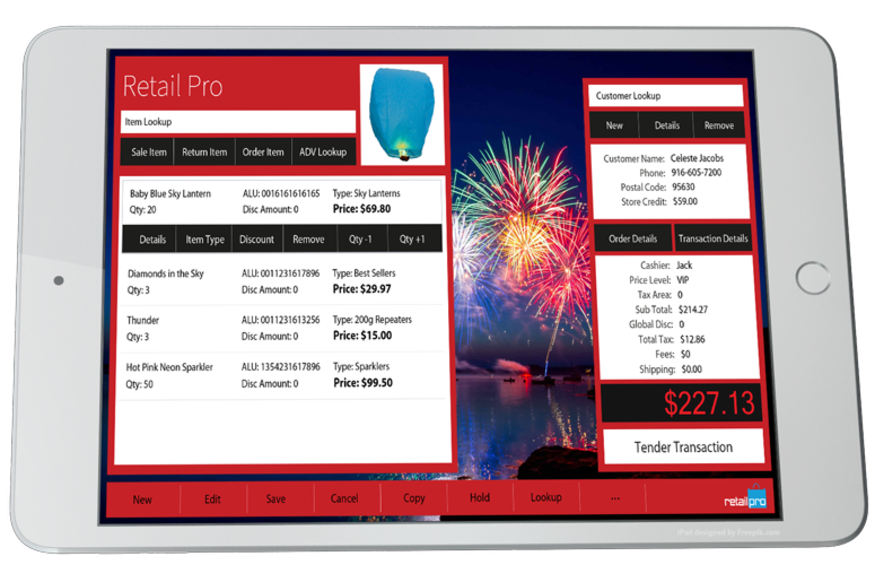