Mobile payment is quite likely to be one of “the” big topics at the NRF Big Show, which starts  Sunday in New York City. Just as “omnichannel” and “customer-centric” were the focus of previous years, it’s a safe bet that mobile payment solutions will be a dominant player at the Javitz center next week. 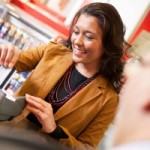 A recent study conducted by Wakefield Research during the holiday shopping season found that most of the respondents were interested in paying for purchases at physical store locations with their smartphones. Fifty-three percent responded that it was important for more stores to install devices that let consumers pay with their devices, which seems to suggest that there is a willingness to pay via this method but the option is not always available. Age also seems to be a factor; 64 percent of respondents who were younger than 40 seemed most eager to pay using a mobile phone.

A few large retailers have implemented the technology needed to make mobile payments a reality for these shoppers, or they have announced plans to get on the bandwagon. That kind of publicity will further help speed user adoption. BI intelligence forecasts that US mobile payment volume will grow at a five-year compound annual growth rate of 172%. Apple Pay has seemingly lit a fuse: In just the month after it debuted, payments made through the feature comprised between 0.1% and 1.6% of transactions at five top retailers, according to BI Intelligence, which characterized that rate as “exceptional momentum.”

For mobile payments to become a viable option for consumers, not only must retailers invest in new hardware and software, but consumers must also be educated in what benefits the technology offers, as well as how information is protected. More than half of the Wakefield respondents (56 percent) said they would continue shopping at a store that had suffered a credit card information breach; however, the number of consumers who were less likely to continue shopping at such a store was still a significant 44 percent.

Retailers ought not miss the opportunity to educate customers on mobile payments — it could afford them the opportunity to continue to build a trusted relationship with the consumer, and there are substantial benefits for both parties using mobile payment technology. Among the top advantages to using smartphones instead of traditional payment methods cited in the Wakefield research:

The last is a critical point. Eighteen months ago, a Federal Reserve study noted that 42 percent of consumers were concerned about data security, and that concern was the most cited reason regarding why consumers have not used mobile payments. While consumers may have been skeptical about the security surrounding mobile payments, many (particularly Millennials) are concluding that with today’s technology, mobile payments might, in fact, be more secure than credit cards — even those with chip-and-pin technology. Ironically, secure mobile payments may, in fact, take off because of the recent spate of credit card hacks.

Certainly, there will be plenty of mobile technology to check out at the Big Show. See you there.