How Retailers Can Be Part of the ‘Experience Economy’

The “experience economy” was born more than 15 years ago, but today the concept is more relevant than ever. Bringing customers more than just good products at a good value is expected today. Consumers who have made the decision to go to a brick and mortar often want  to be treated with a personal touch, and have an enjoyable experience. Serve goes hand-in-glove with atmosphere; today’s retailer must invest in both to be successful. 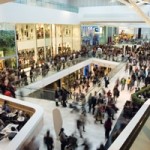 One of the benefits of retail technology is the ability to collect information and drive better retail business intelligence.

But a retailer’s job doesn’t stop there, in actuality, it’s just beginning. For example, the book store with the coffee shop inside and learned staff is intriguing for a while, but after some time customers tire of it. There are no compelling new reasons to go there, and, unless you feel like a cup of coffee, it’s easier to go online and buy a copy of War and Peace.

Earlier in the year, the Harvard Business Review published a case study on this “fatigue” factor as it affected the Georgia Aquarium. The aquarium had opened in 2005 as the largest in the world: 120,000 animals spread across 60 habitats in excess of 8 million gallons of water.  But after the novelty wore off within a few years, attendance fell from a high of 3.5 million to 2 million. The aquarium had to confront what turned out to be an industrywide problem of declining revenue and attendance.

Because the aquarium was one of the most expensive in the United States, raising ticket prices wasn’t an option to boost sales numbers. In addition, that was unlikely to increase attendance. Adding attractions was ruled out as not a permanent solution; the new exhibits might be popular for a while, but it was likely that soon the same problem would reoccur, and only the “regulars” would be visiting.

A marketing expert was hired, who realized the problem was similar to that faced by brick-andmortar retail: How do you bring in the “right” customers, and cultivate them into loyal patrons? The answer is by using business intelligence to figure out what demographic is likely to be the best future customer, and target marketing to it.

The aquarium did something familiar to any retailer: First, it gathered information on its current best customers, including their ZIP codes. Then, it targeted “lookalike” ZIP codes and identified areas that were similar to the ones where the existing best customers lived. Those were families just waiting to learn about what the Georgia Aquarium could offer.

One difficulty with increasing the number of visitors is that typically as an attraction grows in popularity, customer satisfaction declines. Lines are longer, crowding is unpleasant and the entire experience is not one that engenders a return trip. To combat that, the aquarium added jugglers, mimes and a DJ to entertain people waiting in line. Inside, a parade, singers, and other activities encouraged visitors to stay in the atrium longer, thus shortening lines for exhibits. According to the HBR, satisfaction rose 3% from the prior year.

Retailers aiming to provide an experience for shoppers can learn valuable lessons from the Georgia Aquarium. Perhaps the biggest on of all: While it’s important to put on a good show, it’s mission critical to collect data, analyze it, and use that business intelligence to expand your customer base. Successful retailers in the Experience Economy are not one-trick ponies. Rather, they can grow and adapt and continue providing value while cultivating a loyal customer base.